By Silvia Giordano and Amjad Al-Mestarihy

Less than two months ago I had the opportunity to visit Jordan in the framework of a cultural exchange program. My visit, short but intense, was possible thanks to Tandemforculture and the amazing group of people sharing this experience. I still hold in my spirit the wonders I got in touch with in the few days spent there, but there’s one aspect in particular which was of particular interest to me, and that was discovering one of our Tandem friends’ home, the city of Irbid. Situated in the north of the country, 70 km from the touristic capital, it is less than one hour by car from Syria and Palestine. Walking around the town, I asked my friend Amjad, cultural manager for MedeArts Organization and part of Tandem Shaml, to depict some cultural insights of his environment…

Exploring the town, we have a view of the skyline. I start feeling a little bit dizzy as we approach a steep wall, so we decide to turn back and stop by a panoramic spot. On the right side, the border of Palestine.

By 1954, the camp’s inhabitants started to replace the tents with mud shelters and UNRWA provided them with roofing material. Over the years the refugees have replaced these dwellings with concrete shelters and the camp now resembles some of the urban quarters in Irbid. UNRWA’s installations in the camp also provide services for the refugees in the camp’s surroundings. Irbid camp was one of four camps established in Jordan for refugees who left Palestine as a result of the 1948 Arab-Israeli war. The camp was set up in 1951 on an area of 0.24 square kilometres near the town of Irbid, in northern Jordan. Originally, it housed 4,000 refugees. Now the camp is one of the biggest part in the city. In this time most of the families are mixed between the Palestinians and Jordanians. Jordan is the only Arabic country recognizing Jordanian nationality to the Palestinians. 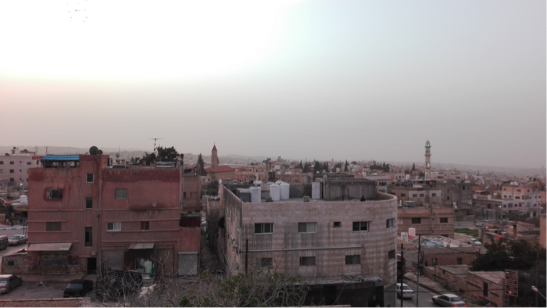 A view from Irbid

… somewhere on the left, Syria’s not far;

For Irbid city Syria is closer than any other city in side Jordan, 30 minutes from Irbid by car will be enough to pass the borders to get there. Some people are used to have breakfast, go shopping and meet some friends in Syria, then they go back to Irbid.

After a visit to SAMA VR, a cultural hub, we get to the centre: walking around is a continuous discovery of narratives, voices, scents and hints. We stop at Alkamal Café, the historical one in town, where we chat and have something to drink. The feeling is of being in a hectic and dynamic area, with such a lot of commercial activities and open markets around. Amjad tells us about one corner where you can find different Western brands scattered in clothes of all kinds for less than one euro. My eyes go back to a picture I took: a Mosque just in front of a Christian Church. With my travel mates, we share a feeling of amazement for the density of diverse cultural insights popping up…

The old Irbid hill with church and minaret of the Mamluke Mosque.

Since a long time my country has been the most safe and stable in the Middle East: many people started to come to live in Jordan seeking a place of refugees because of the Wars, and that makes Jordan a country diverse and rich in culture. The king of Jordan Abduallah the second, he took a price for being a leader and role model in making peace among religions and different cultures.

How do you engage in a cultural perspective in your hometown?

Through my work at MedeArts I was able to get experience in many different artistic fields and I am so thankful about that! Next to being a member of the management team of MedArts network I work as a graphic designer for MedeArts and provide service to a range of institutions working in the cultural and artistic fields in Jordan. Through this I was responsible for organizing different cultural events and festivals (like Daraj festival for Culture and Arts). In addition to MedeArts I helped in managing a range of cultural and community spaces like Cannoli coffee house in Irbid, the Art Club and Garage Art. I am passionate about arts and culture in general and I believe in the power of it to bring change in society. I myself have been playing guitar for many years, I am a member in Octave band and participated in the Jalatoun Music project. With MedeArts I got the change to work together with international organizations and in the recent past I got chances to travel to different countries for cultural and musical training (like Tandem for culture and ‘Erasmus+ training: United in Music’) and since then am working closely with a partner in Belgrade Serbia on our first independent space and theater Garage Art.

The multidisciplinary perspective is definitely there the more we walk around. We are shown some graffitis, which Amjad contributed to draw. I get curiouser and curiouser. I ask Amjad to tell me more about his cultural organization here…

MedeArts (The City-Artists Network Association) is an Arts Development Network in cities and governorates in Jordan. We focus in MedeArts to support local artists and positively influencing the general cultural & art scene, Including promoting the importance of the role of art for expression, change and develop communities, and magnifying the social interaction. MedeArts aims to create an environment where our members can experiment, research and learn from each other so we can develop visionary artists who will be the creative thinkers of the future. In addition, providing a supportive and vibrant artistic community where creativity can be nurtured while helping students to understand the art market and the world of the professional artist to enable them to make informed choices within their creative practice.

At night, a beautiful concert is organized Lexicon Academy. Music definitely joins everyone…

A group of young people gather from different countries with MedeArts to make the traditional and cultural music in the city and that makes a wonderful impact to the people, all the festivals in Irbid city now are full with love and families and that was not possible before. In the last 8 years the Culture of music has taken a huge turn here: it’s interesting how the Palestinian, Syrian, and the Jordanian Music Culture mixed and played a significant role: now the cultural exchange among these countries is the biggest and the most interesting one in the Middle East.

… I ask for some links to listen some of the Syrian tracks again and again… but I have to be happy with my videos on the phone.

With a smile in my spirit, full of positive vibes I go back home with another piece of evidence showing how cultural encounters can really be a vector to foster empathy, notwithstanding borders.

Thanks Amjad, thanks MedeArts. And, of course, thanks Tandem.